The winter chorus concert was held on December 14. 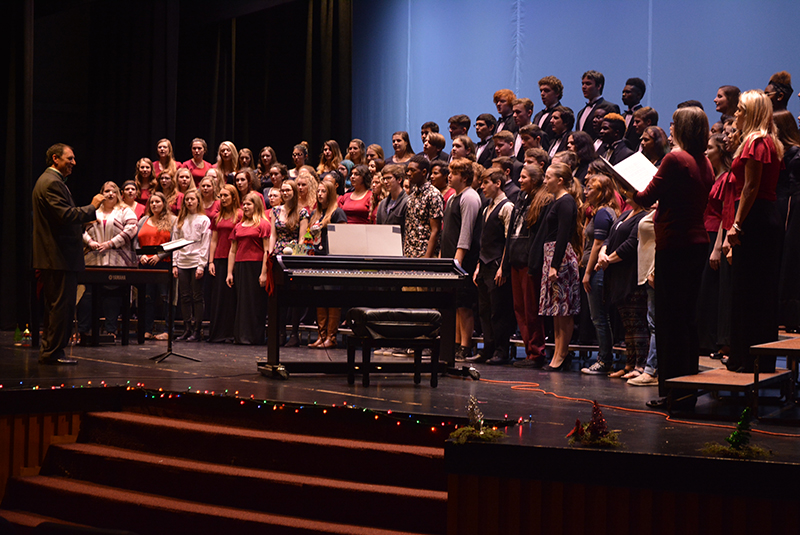 The winter choir concert was held on Thursday, December 14 and the seats of the auditorium were full. Over 100 students performed in the concert including Mr. Coppola’s 3 choral groups; Chamber Ensemble, Jazz Choir, and Concert Choir.
The concert started off with a selection of songs sung by the Chamber Ensemble. They performed 5 arrangements including Variations of Jingle Bells featuring soloist, senior Jocelyn Evans.
The Jazz Choir, also known as Select 16 performed next in the concert. They sang 3 songs as a group and during We Wish You The Merriest, sophomores Ian Gadapee and Bailey Hill performed a solo and dance duet. That piece was the finale to their portion of the concert.
The Concert Choir performed third in the concert and their part of the concert included a tribute to Gene Wilder from Charlie and the Chocolate Factory with a performance of Pure Imagination. They then performed 3 selections from the Disney Candlelight songs that will be performed on December 27 at Epcot.
As a yearly tradition, Hallelujah Chorus was performed and alumni in the audience were invited to join the chorus on stage and sing the familiar tune. The concert ended with White Christmas and it was apparent that all of the hard work had paid off in a concert well attended and full of entertainment.